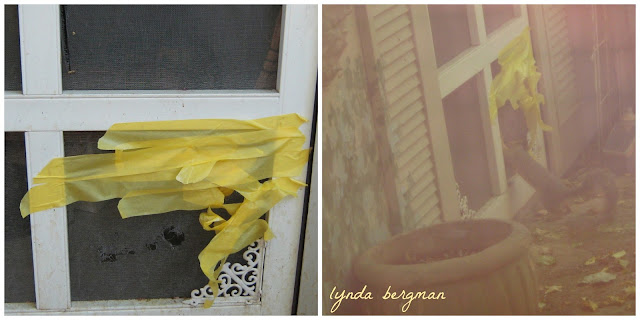 Instead of putting the bird seed back in the big garbage can, it was easier to leave the sacks on the floor of the garden shed.  I noticed some holes in the screen and then, through the laundry room window, I was able to take a photo of the culprit!!  That squirrel had chewed holes in my screen to get to the sunflower seeds.  The yellow tape was to deter the squirrel.  I twisted several pieces so it would be sticky.
After a couple of days, the handyman came to replace the screen.  Even though I had chosen a much thicker screen, he said that squirrel might chew through it, too.  So, I'm keeping the birdseed in the big trash can, again.
Everything is hungry and trying to survive.
(I understand, but it doesn't make me like the squirrel!!)
Posted by Lynda Bergman Decorative Artisan at 6:56 PM