"Compassion counts above all else --
more than intelligence, wealth, power or prominence.
Those who have it, and extend it to all living beings,
fully understand its potential to single-handedly change the world."
~ Brennan Browne

Watch this wonderful little elephant charge the visitors to his park.
I think he's very young because he doesn't seem to know what to do with his trunk.
Google says they discover their trunks around 6 or 8 months of age.  They finally learn to use them around one year of age.
I love when he charges and then throws out that back right leg as a feisty little threat.
I think his mommy rumbles to him to come on, let's go!
He's so, so cute!!
(If you click on "YouTube" in the bottom right corner of the picture, you'll see a larger version of this movie.)
Posted by Lynda Bergman Decorative Artisan at 3:43 PM No comments:

DO YOU KNOW ABOUT THE HERB CALLED "BEDSTRAW"

DO YOU KNOW ABOUT THE HERB CALLED "BEDSTRAW"
Spring is almost here!
But, we did have thunder storms in January.  The old saying is "thunder in January, freeze in April" so, I'm keeping my fingers crossed that it won't be too bad. 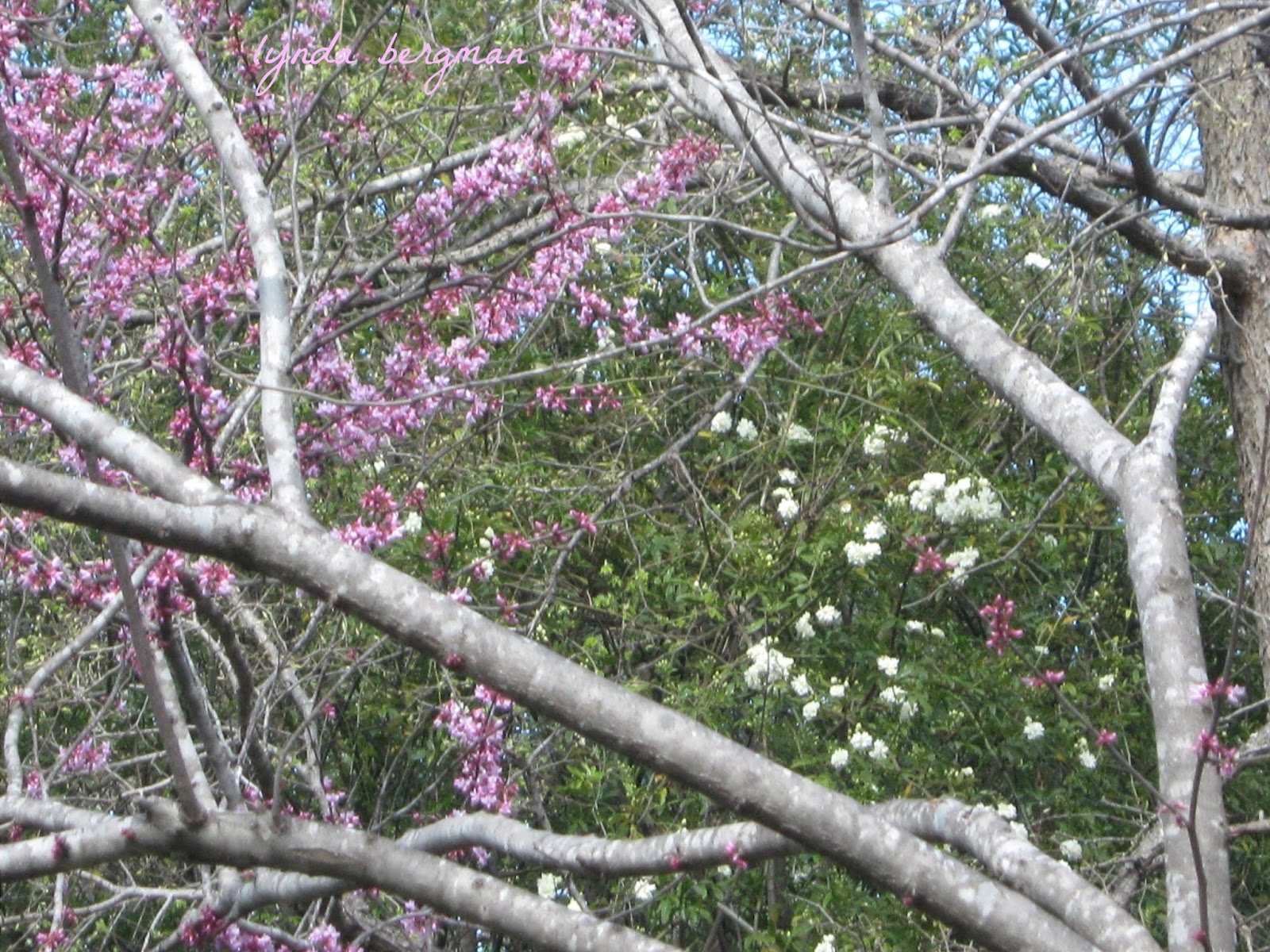 The purple blooms are my redbud tree.  Always so beautiful!
Those little white roses are my lady banksia.  It always blooms late winter, early spring.  It climbs way up high in the trees around it. 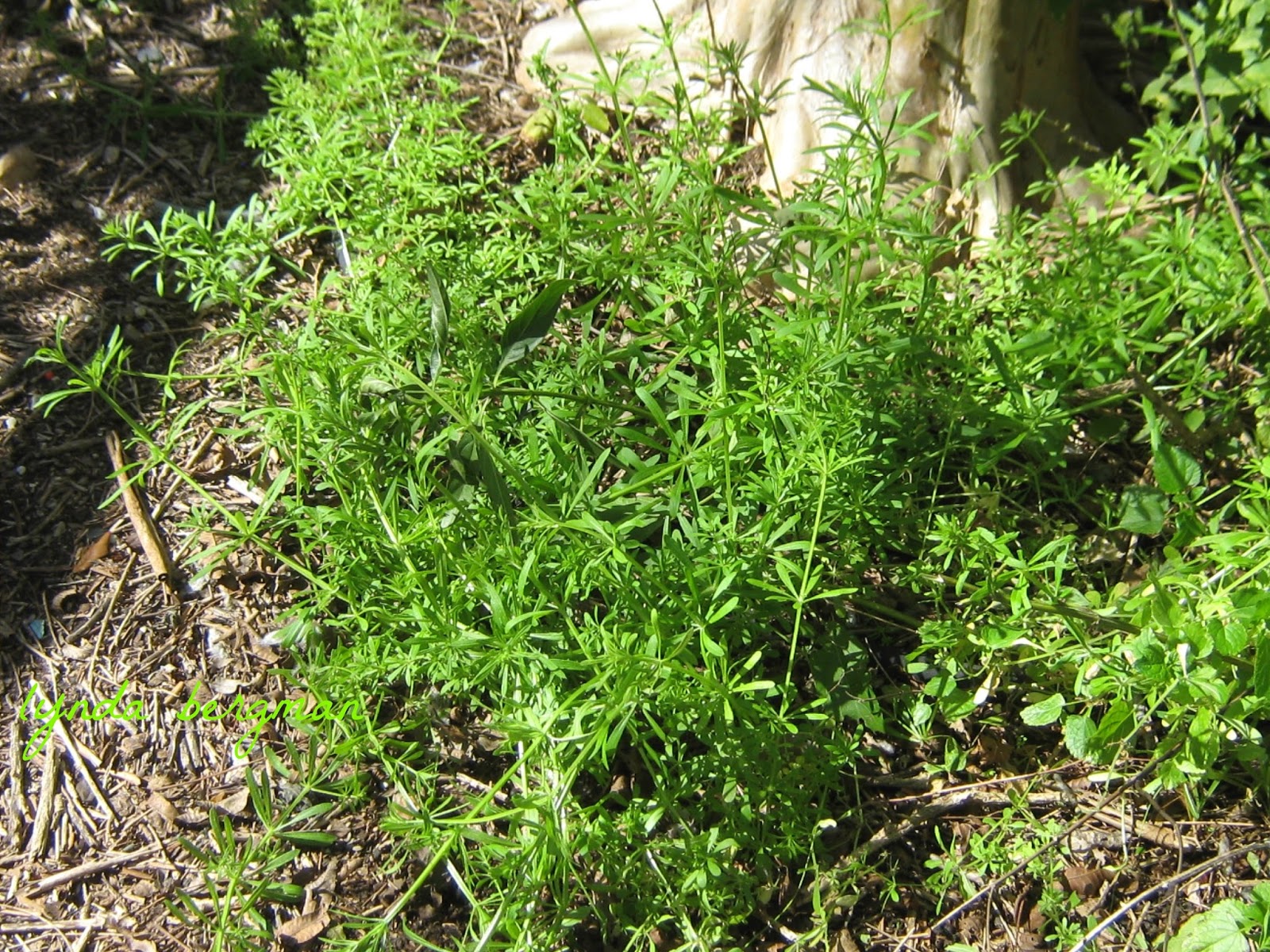 Do you know about the herb bedstraw?
It is a very common weed and spreads out.  That one plant that you see in this picture has one tiny root and is very easy to rake or pull up.  Because of the cold weather and rainy days, I got behind in my weeding.  I guess I could stuff some pillowcases and let the outside cats lie on them.
I googled bedstraw and look what it says about this herb:

"It has been suggested that this herb, which was constantly used for stuffing mattresses, was the actual bedding of the manger at Bethlehem." (Google)
Bedstraw is an imported common name; a yellow-flowered variant (G. verum) was used to stuff mattresses in medieval times, taking advantage of its pleasant aroma. According to one of the many apocryphal Christian legends, it was purportedly used in the crèche for the bedding of the infant Jesus, the originally white flowers turning gold in recognition of his divinity.
(Hiker's Notebook Google) 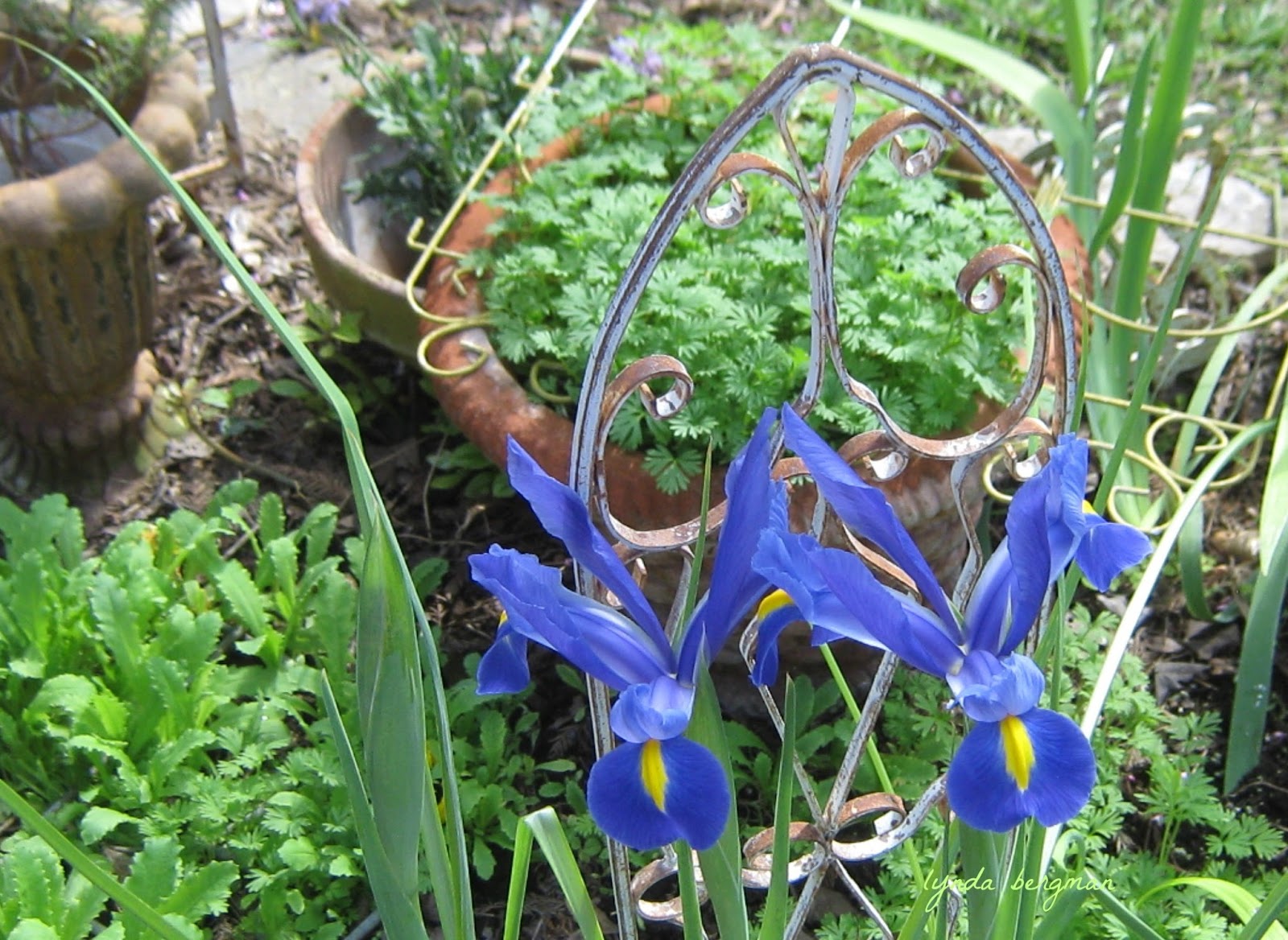 Such lovely irises!  They opened yesterday.
In the background, you can see lots of larkspur.  I got them planted a little late, but I do think they will be blooming by Easter.  I have no idea what is on the left side of the picture.  In the fall, I threw out some seed packages that I didn't plant last spring.  I'm really wondering what it is.
Have a very peaceful weekend.
Posted by Lynda Bergman Decorative Artisan at 7:06 PM 2 comments:

Below is Pam's comment about the previous post:
"This made me think of a funny. I am a terrible speller. Simply awful. When my husband and I were dating, we were emailing each other back and forth. I wanted to say No Way Jose to something, but typed No Way Hose. That's the only way we say it now, pronouncing it just like a garden hose. It's our own private 20+ year old joke."
Such cute memories!
It reminds me of something else.
Our Mema lived to be over 100 years old.  Everybody loved her because she was so sweet.
A long time ago, she was telling me about what she called a "bad girl".
Mema told me "she was a "H".
I'll never forget that!!
Hugs to Mema in heaven
Posted by Lynda Bergman Decorative Artisan at 7:30 PM No comments:

(Will you find me using this!) 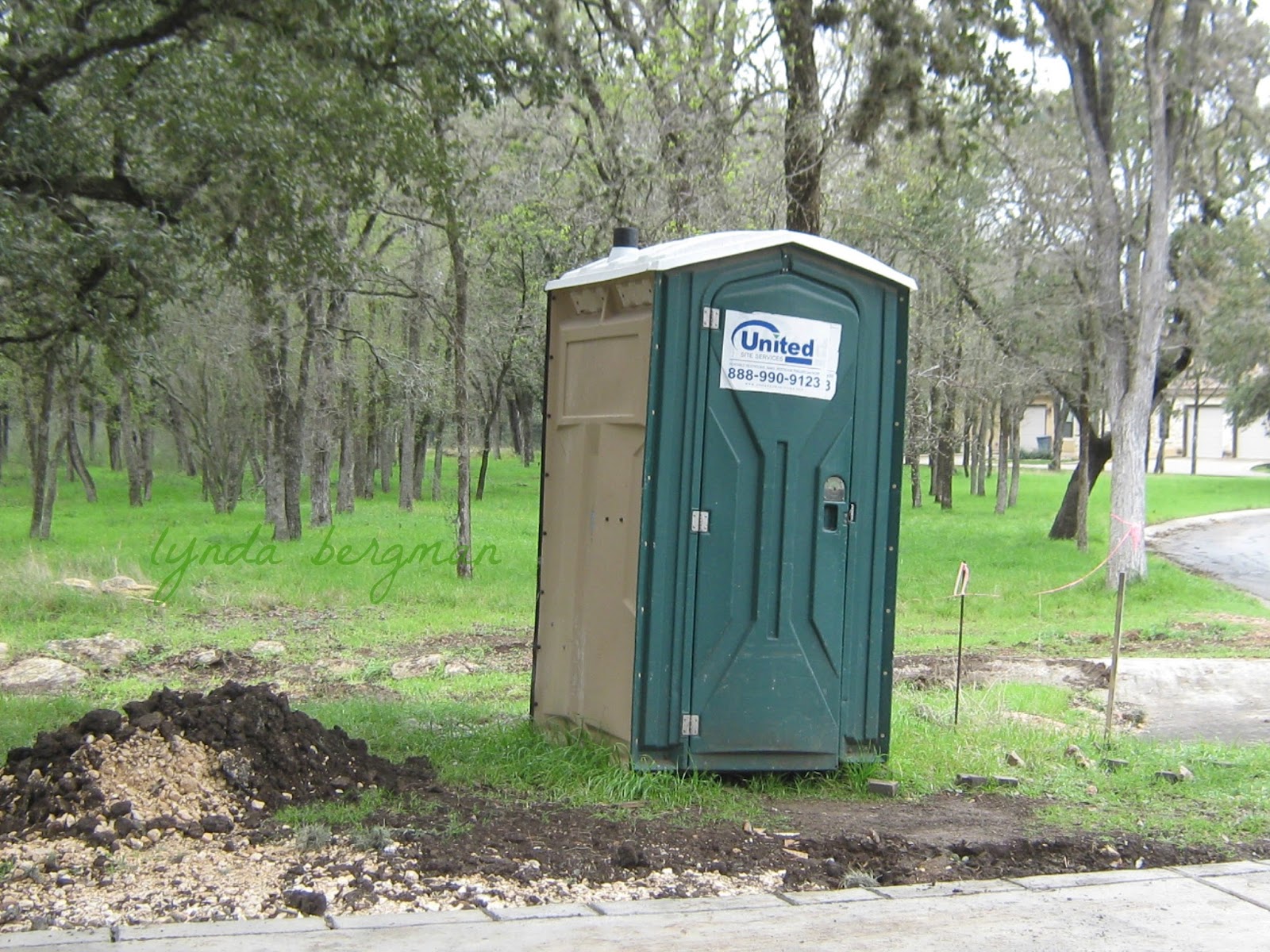 It's for the guys where I'm working.
Look how it's leaning.  If I stepped in that thing, it would probably tump over :)
Posted by Lynda Bergman Decorative Artisan at 8:31 PM 2 comments:

One lion’s life – a lesson about hunting

Posted by Guest Blogger  in Animal Encounters, Conservation, Hunting
Posted: March 4, 2015
Written by: Bradley Leontsinis
I will never forget the day I first laid eyes on the most impressive animal I have seen in my life. I was guiding a safari on foot in Kafue National Park, Zambia. It was not long before I picked up some unmistakable tracks, which immediately sent a cold shiver down my spine. The people that I was guiding were blissfully unaware that I had just found the largest tracks of any lion I had ever seen!
The bush was deafeningly quiet… too quiet. Only the shrill alarm call of an irate squirrel was cutting through the silence. I held up my hand signalling everyone to stop and stay still. I made a measured choice of backing slowly away with my guests and going back to camp, returning with the vehicle to find the lion calmly lying a short distance from where we stopped. He looked up at us with steel eyes and everyone on the vehicle gasped in awe of this enormous animal. That was the day I met Big John.

Big Johns’ story and subsequent death are very relevant to the hotly debated topic of trophy hunting. While estimates of wild lion populations vary, it is safe to assume the number to be in the region of 20 000. With 7 billion people on the planet and rising, the lion population is in dire straits.
There are several contributing factors to this:
1. Trophy hunting – Targets the best genes in a population. If this superior animal’s genes are not in high enough density in the population, prevented due to its untimely death through hunting, it’s ability to produce offspring with the same impressive traits and necessities to survival is prevented. This paves the way for weaker genes to be more abundant.
2. Gene flow prevention – Limiting the wild animals ability to prevent inbreeding by placing boundary fences around them on small reserves, prevents the natural flow of genes between different populations. In so doing we are severely weakening the gene pool. On a typical, small, managed reserve in Africa, only one, maybe two prides of lions can exist. Preventing inbreeding in this scenario is costly and difficult.
3. Disease – Feline Immunodeficiency Virus (feline version of HIV), and Tuberculosis result in lions which look more like scrawny flee bags rather than proud kings of the savanna. Fortunately these diseases have not spread to all lion populations but by destroying the strongest genes through we are severely weakening other populations ability to fend off these diseases.
4. Habitat destruction – There is simply not enough space left for wildlife to roam in the way it was designed. This results in countries being forced to contain wildlife in small fenced reserves already described. The reserves are often overloaded beyond their carrying capacities and animals are forced to compete intensely for limited resources.
I go back to my story of Big John. For a single male lion to hold territories against other male coalitions is unusual. Male lions usually join forces to create coalitions of 2 or 3 males, which become formidable opposition as a team. Big John was very large and strong enough to fight off these typical coalitions on his own. This should give some level of appreciation as to how powerful this lion was and equally how important his genes were.
Hunting on Kafue National Park is illegal but this particular reserve does not rely on fences as a boundary but rather a large buffer zone between the reserve and any human settlements. Hunting safari lodges are therefore littered on the reserve boundary. Animals do not recognise invisible barriers and freely walk off the reserve directly onto the hunting lands where they are vulnerable. Even to the point where hunting operators would drag a carcass of a dead antelope from the reserve side, along the ground and across the boundary, leaving a blood trail and baiting predators such as lions and leopards onto their properties where they can freely shoot them.
Hunting quotas are given by authorities to each of the operators which limit the number of animals they can shoot per species but due to a lack of policing are almost impossible to enforce. So it is up to the hunters, guided by good morals, to stick to these quotas.
Big John was different, everyone in the area knew about him and it was agreed amongst all parties to leave him be, for the time being at least.
That is unfortunately not how this story played out. One fateful day we tracked Big Johns footprints directly across the invisible boundary and off of the reserve onto a hunting farm in the buffer area.
That was the last sign anyone ever saw of Big John.
The hunting operators staunchly denied our angry accusations, but all signs pointed to Big John’s fate being sealed by a hunter’s bullet.

Now here is the true tragedy. Following Big John’s death, the two prides which he controlled and protected were without a male and the pride’s were open to infiltration from any male, weak or strong, who did not have to go through the crucial process of natural selection by defeating a pride male or coalition. When new males take over a pride they immediately kill the cubs, which forces the females to come into oestrus again. In this case a pair of young inexperienced males took over the two prides, immediately killing the cubs, which were fathered by Big John. This meant that Big John’s crucially powerful genes were forever eradicated.
This is the reality of trophy hunting. There are many conservation arguments presented, which in principal make sense. The problem is they are null and void if you cannot prevent the type of situation, which occurred with Big John’s death from being a constant reality. Trophy hunters will say that Big John’s life was worth it for the thousands of US dollars pumped into conservation for his death.
Yes, it meant that a single tourist came to the region and spent some money but if Big John was shot with a camera and not a gun, his legacy would be on going, the number of tourists that would spend money in the region, just to come and see him and his subsequent offspring would be exponential compared to that one tourist.
Posted by Lynda Bergman Decorative Artisan at 11:50 AM No comments:

"There’s been quite a stir in game-viewing circles in Kruger National Park lately. And a little white lion cub is at the thick of it all. This ‘new’ white lion of Kruger was first spotted in July 2014 (supposedly about 3-4 months old at the time)." 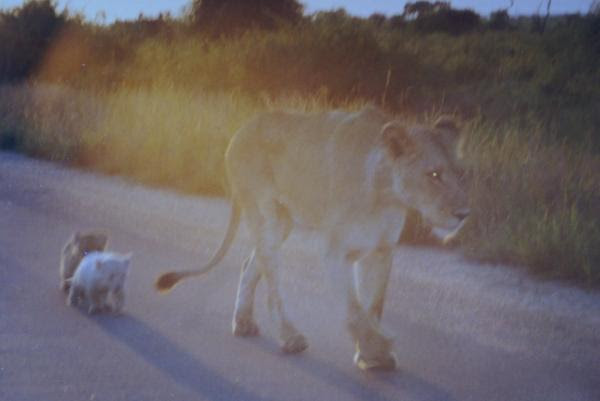