The story about Cecil the lion was so, so sad to me.  I don't understand the mentality of wanting to kill such a beautiful, unique animal for the pleasure of a photograph with it or to hang it on your wall.  They tortured Cecil.  First that guy shot him with a bow and arrow.  That didn't kill him, so they tracked him for 40 hours and shot him, skinned him and cut off his head.  Up until that happened, Cecil had been treated really well and people loved him and his pride.
Unbelievable!!
So, with all of the talk and outrage about Cecil, one of the guys on the radio was talking about it, yesterday.   He was talking about the contrast of outrage to the recent videos of the aborted babies and what was happening to them.  He was wondering why the outrage wasn't the same for them.  To me, it's just so horrifying and shocking that I could never put into words what I'm feeling.  And, nothing I could say or do would change anything.
I know of three women who told me they had an abortion when they were very young and regretted it terribly.  The sorrow and the guilt were overwhelming.  Especially when we're young, sometimes we  make choices without guidance.  Choices that we later regret.  Maybe, maybe, maybe these recent videos will help someone make better and more informed choices.
That radio talk show conversation did make me think and ponder about the reason I haven't discussed it with anyone.  It's just so horrifying and awful.
I may start a discussion with family, but I'm not even sure what I will say. 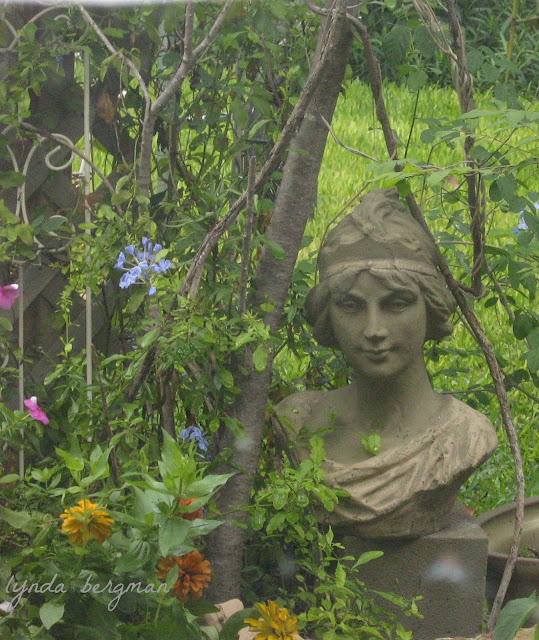 A blogger's comment on my post about Cecil The Lion:
Clipped Wings Blog
"That is a tragedy, but people kill off tons of dogs and cats every year and think nothing about it. Those are tragedies also. Most people tend to think of animals as not important in the realm of comparison to humans, so they are considered more expendable which is a shame, but a fact of life."
Yes, we can't forget about them.
Very, very sad!
Posted by Lynda Bergman Decorative Artisan at 11:53 AM No comments:

There is a trellis over my fish pond.  Yesterday, I was feeding the fish and looked up and saw this beautiful, vibrant wisteria blossom.  It's supposed to bloom in early spring, but I love seeing it now.  I looked all over the vine and up in the trees where it climbs and didn't see another bloom. 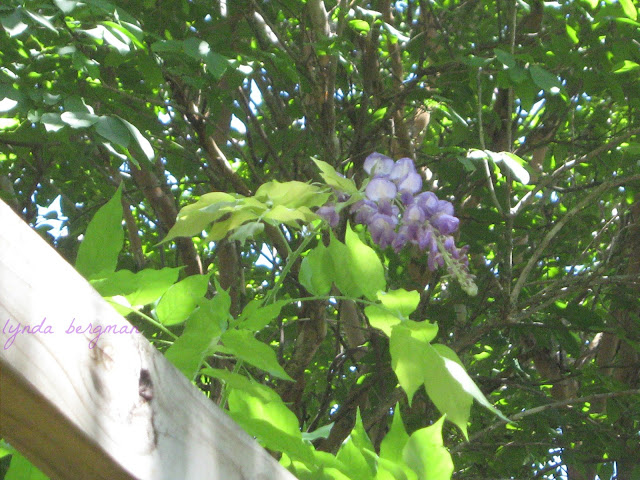 Posted by Lynda Bergman Decorative Artisan at 10:30 AM No comments:

A few weeks ago, I shared with you a picture of an aqua door that I was painting with artwork.
Finally, I finished painting it and here it is. 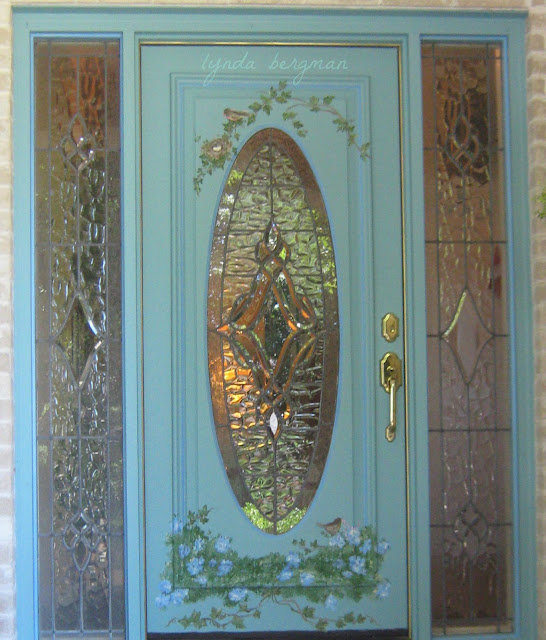 Karen's door was dark brown.  She and I chose this new color for the door.
I painted it and then painted the artwork. 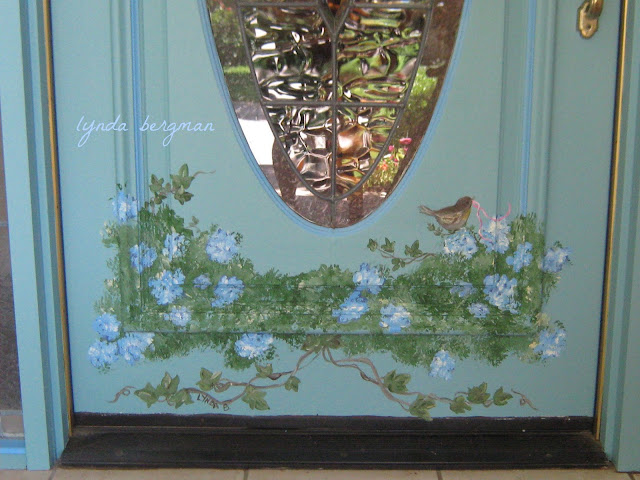 Mr. Birdie taking a ribbon to his nest. 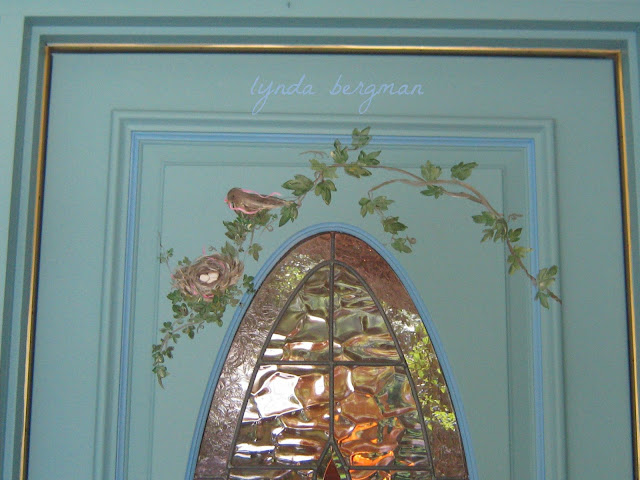 Mrs. Birdie building her nest with a ribbon.
~
I painted Karen's garage door to look like it might be carriage house doors.  And, painted ivy and butterflies on it.
For more pictures, visit this link:
PAINTING BIRDS & A NEST ON KAREN'S FRONT DOOR & GARAGE DOOR TO CARRIAGE HOUSE DOORS
This door was fun to paint and Karen had new landscaping added with tons of pink, purple and blue flowers.
Posted by Lynda Bergman Decorative Artisan at 5:02 PM No comments:

I had no idea this could happen!
How strong that jaguar must be to pick up a crocodile and carry it across the river.
NATIONAL GEOGRAPHIC
(for a larger view, click on youtube.com in the lower right hand corner.)
Posted by Lynda Bergman Decorative Artisan at 1:19 PM No comments:

NATURE IS SPEAKING
JULIA ROBERTS AS MOTHER NATURE
NATURE IS SPEAKING.ORG
(Click on YouTube in the right bottom corner for a larger view
Or, natureisspeaking.org)
Posted by Lynda Bergman Decorative Artisan at 7:03 AM No comments:

"Superb leopard sighting this morning in the Conservation Area. With the return of lions to the Conservation Area, we rarely see leopards these days - so this was extra special. It was thanks to the monkeys who were making loud alarm calls which alerted us to the leopard's presence."

EWASO LIONS
on Facebook
Posted by Lynda Bergman Decorative Artisan at 7:04 AM 4 comments:

I read that in June, animal shelters put down more dogs to make room for all of the runaways on July 4th.  Fireworks frighten them so badly.  They frighten other animals and birds, too.
Posted by Lynda Bergman Decorative Artisan at 8:09 AM No comments: